After Kovid, schools have reopened in Delhi, Tamil Nadu and Kerala

On Monday, schools reopened in Delhi, Tamil Nadu and Kerala after being closed for 19 months.

After a 19-month hiatus, schools in Delhi, Tamil Nadu and Kerala reopened on Monday in compliance with strict COVID-19 protocol as children were excited to return to campus, to meet their friends and teachers, with whom they were limited to interacting online.

Masked students, thermal scanning, and guiding volunteers were a common sight in schools showing astonishing entry and exit where children, ranging from junior to junior branch students, were greeted by teachers who gave them small gift packets and sweets. While several schools in Delhi have reopened with 50 per cent seating capacity, most private schools have postponed reopening after Diwali. Deputy Chief Minister Manish Sisodia visited Rajkia Sarvodaya Vidyalaya in Binod Nagar, East Delhi and exchanged views with the students.

In the primary branch of the school, a student became Sisodia’s doctor who played the role of a patient. “Meet this special doctor in a school classroom today. Full body exams, injections, prescription drugs, and ‘avoid ice cream’ instructions … God … I missed it …,” Sisodia tweeted while sharing. Here are some pictures of a student examining a toy using a toy stethoscope.

“I am excited to be able to go to school regularly from now on. I feel good to be back after almost two years,” said a Class 8 student at Government CO-ED Senior Secondary School, Lajpat Nagar. “Online classes were certainly effective but during physical classes, we can always dispel our doubts.

Because of network problems, sometimes, we don’t get a clear picture of what’s happening and it’s so tiring for the eyes to stare at the screen for so long, “said the student, another student who was equally excited to join the school. Sincerely, he made every effort to take our classes and focus on us individually.

We can approach them individually to allay our suspicions. “” Although they were available, we felt something was missing – fun to meet our friends and come to school. I hope classes will not be affected by the possibility of a third wave. ”Following the significant improvement in the COVID-19 situation in the national capital, the Delhi government announced the reopening of schools for classes 9 to 12, colleges and coaching institutes from September 1.

However, for the first time since March 2020, schools in Delhi are reopening for classes up to 8th. In Kerala, students in grades 1 to 7, 10 and 12 arrived at schools that were sanitized and equipped to welcome children across the state. Offline classes for 8th, 9th and 11th grade students will start on 15th November.

The kids looked excited because some were going to school after long intervals, when the kids in class 1 and 2 went to school for the first time in their lives. School authorities welcomed the children with gift packets including books, pens, sanitizers, masks and balloons. Even teachers were excited because they could take a break from online classes and talk to children physically and get feedback.

“Online classes have their own advantages but sometimes we don’t get the right response. I am very happy that the schools have reopened and we can meet the children. We can teach them and spend time with them. However, we have to be extra careful. Since the epidemic is still here, “Deepa, a teacher at a school in Ernakulam, told PTI.

Parents were also excited that the children would now be able to spend more time in school than being confined to the four walls of the house. “As a mother of two living in an apartment, I feel that my children need more space to expend their energy. At school, they can talk to children their age, meet their teachers, have activities there. Keep them busy and Much more. Although we are still worried about the epidemic, “said Sapna, an Infopark employee.

Parents are worried about children spending time with other students because of Kovid-19, but the state government has assured that all precautions will be taken in schools. School authorities have been instructed to create mid-day meals for children and ensure the services of their doctors as well as distribute them in compliance with the COVID protocol, the education department said.

In Tamil Nadu, students were given a warm, traditional welcome. Chief Minister MK Stalin visited an institution run by Chennai Corporation in Guindy and distributed educational kits and sweets to the children. He was accompanied by Minister of State Evi Velu and mother Subramanian.

Across the state, schools have reopened for offline classes for students in grades 1 to 8, with enthusiastic children being greeted in some places by traditional Tamil receptions involving the Nagaswaram-Thavil instrument used in auspicious occasions like weddings. In many schools, teachers greet children with flowers and chocolates sprinkled with rose water.

Most of the children seemed happy to be reunited with their friends. The state government announced the resumption of physical classes for elementary students from Monday in September, saying the decision was based on feedback from medical experts, academics and parents. Stakeholders commented that students faced stress and learning gaps as they had been confined to their homes since last year, the government said after the outbreak. Students in grades 9-12 have resumed attending physical classes in state schools from September 1 this year. 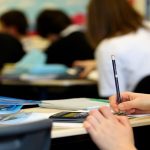 All medical admissions in the state will be based on 12th grade students. The Tamil Nadu government has tabled a motion in the state assembly […]

Rajasthan schools will start the session for 6th to 8th grade

Regular courses for 6th to 8th grade children will return to public and private schools in Rajasthan with 50% power on 20th September, while sessions […]

An outstanding level of legal discussion by the participating parties brings together the best law students to present their arguments. Students of Rajiv Gandhi National […]