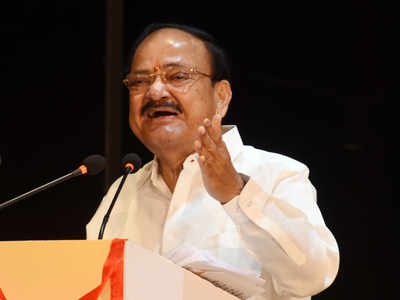 Vice President M Venkaiah Naidu has said that gurus have always been respected and revered in Indian society.

Emphasizing the importance of the fundamental role played by teachers in shaping the lives of children and youth, Vice-President M Venkaiah Naidu said on Wednesday that Indian culture has always shown respect and reverence for gurus. An official statement said the vice president presented an award to Kovela Suprasannacharya here in memory of his teacher, Paluri Hanumajjankiram Sarma, for his contribution to poetry and literature.

Naidu praised the awardee for introducing a new trend in Telugu literary criticism and for incorporating the views of Indian thinkers fighting against discrimination in certain sections of society. Naidu said everyone should always remember and be grateful to their teachers and mentors for their guidance and advice in shaping their careers.

The award, established on the personal initiative of the Vice President of the Telangana Saraswatha Parishad, seeks recognition of its contribution to the Telugu language.

Praising the council for its efforts to preserve and promote the Telugu language, Naidu reiterated that the medium of instruction up to primary school or high school should be in the mother tongue. Similarly, local language should be widely used in administration and judiciary.