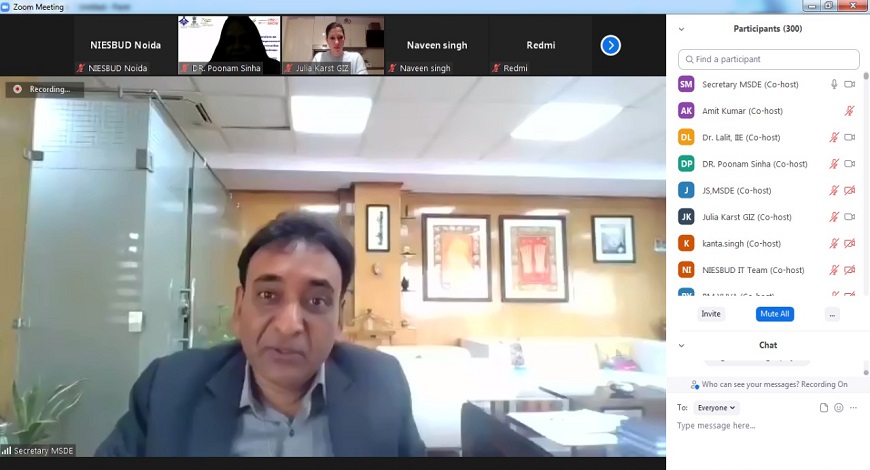 The conclave will be conducted in collaboration with the German Society for International Co-operation (GIZ).

To mark the 75th anniversary of India’s independence, under the flagship initiative of the Government of India, Azadi Ka Amrit Mahotsav, the National Institute for Entrepreneurship and Small Business Development (NIESBUD) organized a digital conclave on the overall empowerment of women through entrepreneurship. Empowering Women through Digital Conclave Entrepreneurs: The Changing Landscape recognizes women entrepreneurs whose innovative approaches and ideas have brought about a promising change in the business and entrepreneurial ecosystem in India.

The event provided a platform for emerging women entrepreneurs to share their success stories, learn from policy makers and discuss resources for entrepreneurship. The Indo-German Development Co-operation Project: Economic Empowerment of Women Entrepreneurs and Conclave by Women Startups (Project Hare and Now) – and co-hosted by Deutsche Gesellschaft for International Jusamenarbit (GIZ).

The landscape of women entrepreneurs in the country has been slowly evolving in the last few years, bringing new opportunities for women entrepreneurs. NIESBUD has partnered with GIZ to expand its training activities and fulfill its skills development mission.

The event also celebrated some of the successful women entrepreneurs trained under Skill India. One such woman inventor is Daya Patki. A resident of Raigarh, Maharashtra, he established Bamboo Tantra in September 2018. Daya enrolled in the Green Skill Development Program conducted by Forest Research Institute, Dehradun and completed a certificate course in bamboo promotion and management. In addition to this course, he has also completed his training in Entrepreneur Development Program from NIESBUD, Dehradun. Bamboo Tantra has managed to make a name for itself. It participates in various exhibitions in Pune and Mumbai and creates online profiles on Facebook and Instagram to market its products.

Another such example is Subarna Rasal from Maharashtra who has been trained under the incubation program of GIZ and Mann Deshi. She now runs her own idol making business called Swami Samarth Gift Article. Subarna feels that being independent and being able to support her family has empowered her. She strongly believes that more women should work and run their own businesses to improve their economic situation. Subarna is keen to share her experiences and inspire women from different regions to come forward and join the Skill India mission.