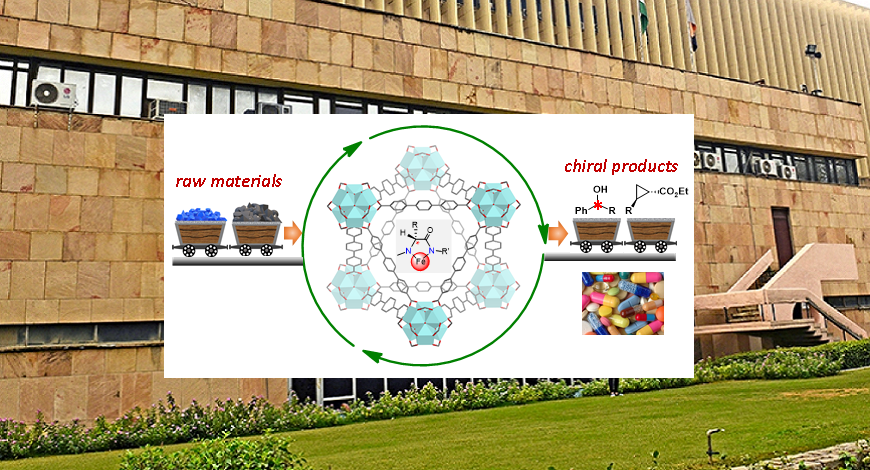 India relies heavily (~ 85 percent) on imports of active pharmaceutical ingredients (APIs), and a significant proportion of those APIs are chiral molecules, essential building blocks for the manufacture of pharmaceuticals, agrochemicals and biologically active compounds.

An IIT Delhi research group led by Professor of Chemistry Kuntal Manna and his PhD students – Neha Antil and Rajshree Nevar – have developed a catalytic technology for sustainable and economical synthesis of evergreen molecules. The Science and Engineering Research Board (SERB), a statutory body of the Department of Science and Technology (DST), Government of India, has funded this research work.

Chiral molecules exist as paired stereoisomers, known as enantiomers, which form mirror images of each other. The classical synthesis of the perpetual small molecule API results in the formation of a mixture of paired enantiomers.

However, two enantiomeric forms of a chiral API exhibit different biological properties, efficacy, and toxicity. While one enantiomeric form may be harmful, the other form is the preferred active ingredient for drugs. Therefore, it is essential that the targeted API should be present in the drug in enantiomerically pure form.

In the pharmaceutical industry, single antiomers of chiral APIs are made by isolating antantomeric mixtures or by directly converting raw materials into the desired antiotomers using a catalyst. The catalysts used in the industry for such antinociceptive transformations are mostly homogeneous and composed of expensive chiral ligands and precious and toxic metals such as iridium, ruthenium, palladium or rhodium.

Unfortunately, both methods are expensive and not environmentally friendly. To address this problem, the research team has developed a metallurgical framework (MOFs) -based catalyst technology for the sustainable and economical synthesis of pure evergreen molecules using inexpensive natural feedstock and abundant metals.

Professor Manna believes that the development of MOF-based earth-rich metal catalysts has the potential for affordable and environmentally friendly domestic production of the enantiopure chiral API.