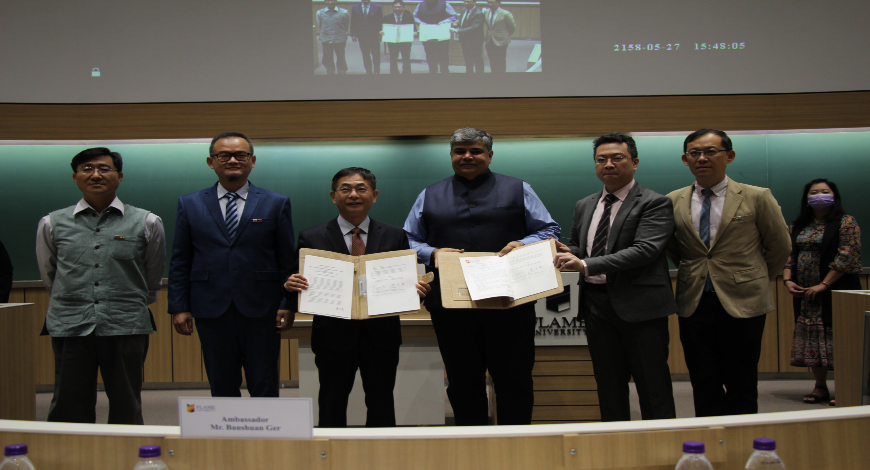 Flame University, Gateway House, Center for Southeast Asian Studies (CSSAS) and Taipei Economic and Cultural Center in India (TECC) hosted the India-Taiwan: Partners for the Future Roundtable. The event also witnessed the launch of the Taiwan Studies Project by FLAME University in the presence of HE Amb. Bashuan Ger, Representative, Taipei Economic and Cultural Center (TECC).

Taiwan’s Ministry of Education launched the Taiwan Study Project in 2003 to work with the world’s top universities, including Cambridge University, University of California – Berkeley, Boston University, Waseda University in Japan, as well as other prestigious higher education institutions in the world. The project aims to expand the knowledge of international scholars about Taiwan.

Dr. Dishan Kamdar, Vice-Chancellor of FLAME University, welcomed the participants and panelists at the Roundtable and said, “I am pleased to announce that FLAME University is the only university in India to be hosting the Taiwanese Studies Project along with other prestigious global educational institutions. The process of learning about a different country, their values, their systems, etc. can be a great learning experience and I am sure it will be beneficial for both scholars and students. “

HE Amb. Bausuan Ger, a representative of the Taipei Economic and Cultural Center, praised Flem University for providing liberal education and congratulated the university for the initiative, and hoped that there would be more academic links between the two democracies. He also spoke about the possible steps that can be taken in the future to strengthen bilateral relations.

According to Dr. Roger Liu, chief investigator of the project, the focus of the Taiwan Studies Project research at FLAME is to conduct a comparative study on democratic governance and its practice in India and Taiwan, both democratic but with different political, economic, historical and geographical backgrounds. Comparing the practice of democratic governance in areas such as environmental governance, public health, women’s rights, and foreign policy practice, the project aims to create dialogue and dialogue between the Indian, Taiwanese, and international academic communities to create high quality research from a comparative perspective. .