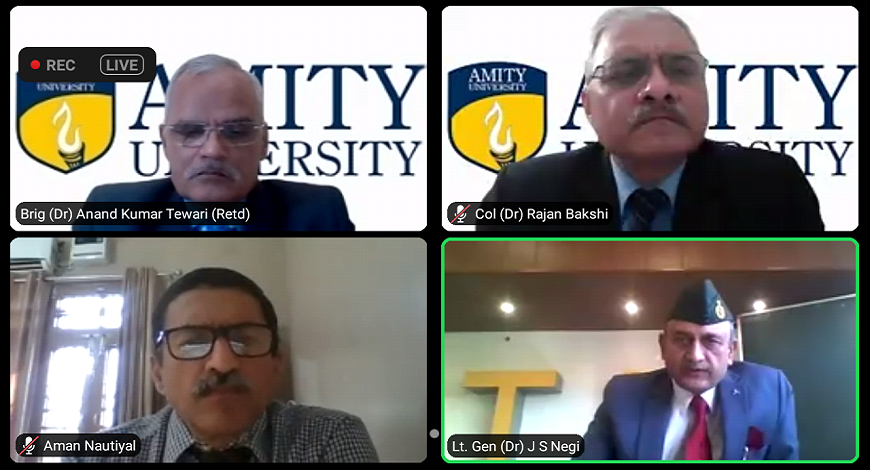 Amity Institute of Defense and Strategic Studies (AIDSS), Amity University, Uttar Pradesh, Noida has organized a panel discussion on ‘China’s Renaissance: Geo-Strategic and Security Challenges for South and Southeast Asia and the Indo-Pacific Region’. . On the virtual platform.

The primary goal of the panel discussion was to enable research scholars to expand their research domain base, qualitatively improve research content, and encourage strong intellectual interaction among researchers.

Highlighting the reasons for China’s rise, the keynote speaker, Lt. Gen. (Dr.) JS Negi, PVSM, AVSM, YSM, VSM **, former Commandant of the Indian Military Academy (IMA), Dehradun, said, As the powers that be have the potential to become stronger, they are fighting for cooperation and competition through the Indo-Pacific region. China seeks to expand its influence in South Asia in its own interests and to gain access to India’s large domestic market as a means of economic growth, which will further strengthen the relationship between the two countries. ”

Welcoming the guests at the event, Lieutenant General (Dr.) SK Gedeok, AVSM (Retd.), DG AIDSS, VP ASTIF, VC AIDT, Commandant AIET, said, . , Chinese engagement in the region is steadily increasing. As a result, China’s interaction with the region’s political elite is growing to convince Asian countries of the benefits of linking their development agendas to Chinese economic policy, while at the same time reassuring them of the gentle nature of their emergence.

A galaxy of 11 brilliant PhD scholars has covered the wide canvas of CAR Nations, South Asia, ASEAN, Indo Pacific and the Indian Ocean Region (IOR) and shared their views on various topics, such as ‘China’s design in Bangladesh, Myanmar and Bhutan: India’s concerns’ Because ‘,’ Sino-Nepalese Bilateral Cooperation: India’s Concerns’, ‘China’s Debt Trap Diplomacy in South Asia, with Special Mention of Sri Lanka and Maldives: Policy Alternatives for India’, among many other issues of relevance.